The Parties to this Convention, aware of the intrinsic value of biological diversity and of the value of nature and its constituent elements on the environmental, genetic, social, economic, scientific educational, cultural, recreational and aesthetic levels, have thus established the first global agreement taking into account all aspects of biological diversity. It has 3 main objectives:

The convention was adopted and opened for signature on June 5, 1992 during the Earth Summit in Rio (Brazil). It entered into force on December 29, 1993 and is now implemented by 196 States and the European Union (197 Parties).

In its preamble, the conservation of biological diversity is "a common concern of mankind" and an integral part of the development process; States have "sovereign rights over their biological resources" and are responsible for them.

The governing body of the Conventon of biological diversity is the Conference of the Parties (CoP). This higher body is made up of all governments that replaced the treaty (the Parties) and meets every two years to review progress, set priorities and decide on work plans. The Secretariat of the Convention is based in Montreal, Canada. Its main functions is to assist governments in implementing the Convention and its programs of work, to organize meetings, to draft documents and to ensure coordination with other international organizations, as well as to generate and diseminate information.

Article 25 of the Convention on biological diversity establishes an open-ended intergovernmental scientific advisory body known as the Subsidiary body on Scientific, Technical and Technological advice (SBSTTA) to advise the Conference of the Parties, or its subsidiary bodies as appropriate, advice on the implementation of the Convention. It must report regularly to the COP on all aspects of its work.
Multidisciplinary and open to the participation of all Parties, the Subsidiary Body includes competent government representatives in the relevant field of expertise. Its functions include: carrying out assessments of the state of biological diversity and the types of measures taken in accordance with the provisions of the Convention; the answer the questions asked to the COP.

SBSTTA has met 24 times to date and has produced a total of 240 recommendations to the COP, most of which have served as the basis for COP decisions. The 24th meeting of SBSTTA first met virtually in May-June 2021, then face-to-face in Geneva (Switzerland) from 13 to 29 March 2022.

The 15th COP will meet in Montreal (Canada) from 7 to 19 of Decembre 2022, after two years of delay, to adop the post-2020 global biodiversity framework. 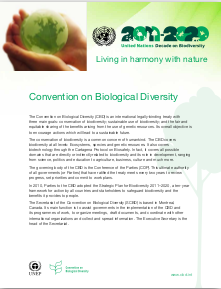